The Miriam (Mariam) Ossuary is Genuine 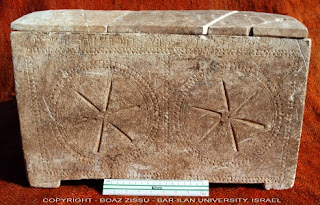 Back in 1990 the ossuary of Caiaphas, the High Priest who presided over the trial of Jesus (Matt. 26:57-67), was discovered. But about three years ago there was another ossuary discovered, this time dedicated to Miriam, the granddaughter of Caiaphas. Specifically, the inscription reads, “Miriam daughter of Yeshua son of Caiaphas, priest of Maaziah from Beth Imri.”
On June 29 the Washington Post reported that Israeli scholars have concluded that the ossuary is indeed genuine.
Yesterday Christopher Rollston, Professor of Old Testament and Semitic Studies at Emmanuel Christian Seminary, posted a helpful article assessing the evidence and its importance in further confirming the identity and existence of Caiaphas as High Priest and how this evidence squares nicely with the New Testament references to him.

So we have yet another example of how archaeological discoveries continue to support the veracity of the Biblical accounts. But, of course, none of this blog's readers should be at all surprised by this!
Written by Keith Throop