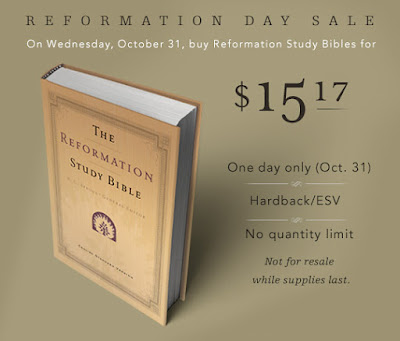 Ligonier Ministries is offering a great study Bible for an unbelievable price on their one day only Reformation Day Sale on October 31.

I began using the New Geneva Study Bible back when it first came out in about 1995. The name was changed a few years later to the Reformation Study Bible. It was originally offered with the New King James Version translation, but they later changed to the English Standard Version when it became available.

In either version it is a great study Bible. Of course, Reformed Baptists will have to excuse a few points of disagreement, in particular the advocacy of paedobaptism, but the shared agreement on the most important doctrines and interpretations of important passages is well worth the purchase ... especially at this price! Here is a brief description from the Ligonier Ministries website:

Widely considered one of the best tools available for Bible study and previously only available in the New King James translation, The Reformation Study Bible has been updated to the readable and accurate English Standard Version (ESV). This foundational resource was created by more than fifty scholars and features thousands of in-depth study notes, 96 theological articles, 19 in-text maps, and 12 charts to help you understand the Bible better.

The Bible measures 9 ¼ in. x 6 ¾ in. The type of the ESV text is 10.25 points and the study notes are approximately 8 points. This is the study Bible for the next generation of reformers.

P.S. Sorry for posting this so late. But at least you still have two days notice.
Written by Keith Throop 1 comment:

Email ThisBlogThis!Share to TwitterShare to FacebookShare to Pinterest
Labels: Bible Versions and Translation 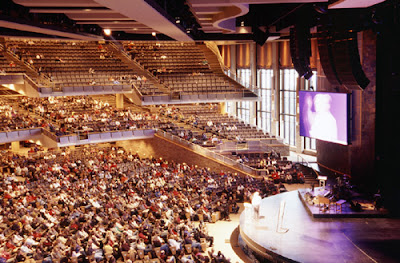 This is the question posed in the title of an October 18 article at the Out of Ur blog at the Christianity Today website. The subtitle reads, "Why the most influential church in America now says 'We made a mistake.'"

Here are a couple of quotes from Bill Hybels that are contained in the article:


Some of the stuff that we have put millions of dollars into thinking it would really help our people grow and develop spiritually, when the data actually came back it wasn’t helping people that much. Other things that we didn’t put that much money into and didn’t put much staff against is stuff our people are crying out for.

We made a mistake. What we should have done when people crossed the line of faith and become Christians, we should have started telling people and teaching people that they have to take responsibility to become ‘self feeders.’ We should have gotten people, taught people, how to read their bible between service, how to do the spiritual practices much more aggressively on their own.

Imagine that. Actually teaching people how to read the Bible for themselves. How could this possibly seem like a novel idea for any church?

Well, at least they are beginning to see through their experience what they should have seen from the Scriptures all along. Not to mention the many, many Christians who have been trying to tell them this for decades now. The author of the article sums it up nicely when he says:


In other words, spiritual growth doesn’t happen best by becoming dependent on elaborate church programs but through the age old spiritual practices of prayer, bible reading, and relationships. And, ironically, these basic disciplines do not require multi-million dollar facilities and hundreds of staff to manage.

Email ThisBlogThis!Share to TwitterShare to FacebookShare to Pinterest
Labels: Items of Interest

The much debated James Ossuary, with an inscription reading ""James, son of Joseph, brother of Jesus," has still not been conclusively ruled a fake. Although no one doubts that it dates to the time of James and Jesus, there has been some question whether or not the inscription was a forgery. However, after having been ruled a fake early on by the Israel Antiquities Authority (IAA), many experts afterward questioned this finding and believed it to be authentic. 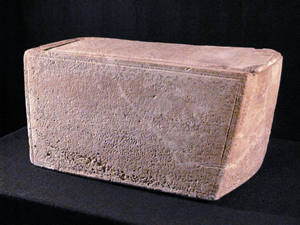 A couple of articles at the Biblical Archaeology Society website question the earlier findings.

For example, in an article excerpted from Theology Today 52:4, entitled "The James Ossuary and Its Implications," J.A. Fitzmeyer reminds the reader that...

(a) The ossuary had been examined by scientists of the Geological Survey of Israel and also by expert curators at the Royal Ontario Museum in Toronto; neither of these teams concluded that the ossuary or its inscription was fake. In fact, the scientists of GSI went out of their way to stress that “the patina does not contain any modern elements (such as modern pigments) and it adheres firmly to the surface. No signs of the use of a modern tool or instrument was [sic] found.” (b) The reaction of the IAA is simply the same as the attitude of most archaeologists about artifacts obtained from antiquities-dealers, as already mentioned. Only now, it has become a matter of politicized archaeology, advocated by the highest authority on antiquities in the State of Israel.

The studies we [at the Royal Ontario Museum] conducted have convinced us that the ossuary and its inscription are genuinely ancient and not a modern forgery. This conclusion, of course, is consistent with the findings of leading Semitic paleographers and Aramaic linguists, as well as the Geological Survey of Israel, and contradicts those who assert that the inscription must be a forgery simply because it is "too good to be true" or because it surfaced on the antiquities market rather than having been found in a professional archaeological excavation.

Monthly "What is a Reformed Baptist?" Poll Update

After about three months running this poll, still well over half of those responding (58%) do not think strict adherence to the Baptist Confession of 1689 is necessary to being a Reformed Baptist. Here is the breakdown thus far (found at the bottom of the page):

17% thought that one only had to be a Baptist who held to Calvinistic soteriology.

32% thought that one must be a Baptist who holds to Calvinism and Covenant Theology.

42% thought that one must be a Baptist who holds to the 1689 Confession.

7% thought that one must hold to the 1689 Confession for the most part, but thought that this should not have to include adherence to the Sabbath requirement.

The sample from which this is taken is still pretty small at this point, but I remain hopeful that there will be many other respondents to the poll over the coming year. There are 276 days left, so if you haven't responded yet, scroll down to the bottom of the page and weigh in.
Written by Keith Throop No comments:

We Need the Gospel Every Day

Those at Immanuel Baptist Church could tell you that I have been preaching consistently for many years that we need the Gospel every day. In fact, some of them may even be tired of hearing me say it.

The Gospel is not something that we outgrow our need for as we move on to the "deeper" issues of the faith. In fact, I would say that growth in the Christian faith means spending the rest of our lives understanding just what the Gospel really means for us. Besides, we certainly need to remember our need for God's grace through Jesus Christ every single day! And this means that we need the Gospel every day.

Anyway, I was very encouraged to find this video of John Piper at GodTube called "6 Minute Gospel," in which he says essentially the same thing... only better than I could say it! I just wish even more pastors would get ahold of this basic idea because, if our people really do need the Gospel every day, then we need to make sure we keep telling them that.
Written by Keith Throop 2 comments:

I discovered on Derick Dickens blog today that Beliefnet has partnered with Time Magazine to bring us the God-o-Meter. I think Derick sums it up nicely, when he says:

I do not know if I am disgusted or just curious. Yet, in th election race, beliefnet.com has a "God-o-Meter" to rank the Presidential Candidates on their religous [sic] talk. I am not necessary [sic] endorsing the meter and believe it to only be using "God talk" as a litmus and not true solid theology in those talks. Therefore, someone like Obama could talk a lot about God but the theology is purely Post-Modern and he gets the same ranking than [sic] Mike Huckabee who has better theology.

Derick has hit the nail right on the head here. There are some accompanying articles that help to clarify the specific views of a few of the candidates, but the only way one can get a true sense of where each one comes down on crucial issues (such as abortion and gay marriage) is to visit each person's site and wade through all the double-speak (with a few exceptions).
It looks to me as though the God-o-Meter may actually be an attempt to blur the distinctions between men such as Huckabee and Obama in order to dupe less knowledgeable or less discerning Evangelicals into thinking that they are relatively equal choices. One wonders if a political liberal didn't come up with this thing just for this purpose.
Do I sound too cynical? Well, remember that Time magazine isn't exactly a bastion of conservatism. Anyway, thanks Derick for pointing it out.