The Fox News website updated an article today entitled Has Noah's Ark Been Found on Turkish Mountaintop? The article reports that:


A group of Chinese and Turkish evangelical explorers say wooden remains they have discovered on Mount Ararat in eastern Turkey are the remains of Noah's Ark.

The group claims that carbon dating proves the relics are 4,800 years old, meaning they date to around the same time the ark was said to be afloat. Mt. Ararat has long been suspected as the final resting place of the craft by evangelicals and literalists hoping to validate biblical stories.

Yeung Wing-Cheung, from the Noah's Ark Ministries International research team that made the discovery, said: "It's not 100 percent that it is Noah's Ark, but we think it is 99.9 percent that this is it."

You can read the rest of the story here.

There are a couple of articles that express doubt about this find.

Second, the Christian Science Monitor posted an article yesterday entitled Doubt Cast on Noah's ark found in Turkey, in which Dr. Randall Price of Liberty University is cited as expressing some grave doubts about the authenticity of the find.
Written by Keith Throop No comments:

e-Sword, what I recommend as the best free Bible study software program, has been updated and now includes the capability to highlight and mark in commentaries and dictionaries. Enjoy!
Written by Keith Throop 2 comments:

I first saw this video over at Jonathan Christman's blog. In it Al Mohler, R.C. Sproul, and Ravi Zacharias offer illuminating commentary on Post-Modernism and the Emergent Church. We would all do well to heed their wise counsel concerning this twin threat to the Church.
Written by Keith Throop 1 comment:

I have been slowly making my way through Dr. Robert Gonzales' excellent book Where Sin Abounds: The Spread of Sin and the Curse in Genesis with Special Focus on the Patriarchal Narratives. So far I have really been enjoying it. In fact, I've had a hard time putting it down. It is well written and insightful, and it interacts with a broad spectrum of other scholarly works. It is also filled with rich footnotes, which are informative and helpful in further study. (You do know that you haven't read a book without reading all the footnotes, don't you? OK, so I am obsessive-compulsive about it, but that doesn't mean it isn't true!)

I am already certain that this book will become a standard reference for me when studying Genesis. But it isn't just another work on Genesis. And what makes it unique isn't just that it is written from a solidly Reformed Baptist perspective. Rather it is Gonzales' treatment of the book of Genesis from a standpoint often overlooked. He laments the way in which the patriarchs are often viewed through rose colored glasses to the point where the important themes of the spread of sin and the curse are missed in much of the Genesis account. He sees this as being due in part to the way scholars often wrongly divide the primeval and patriarchal histories along the lines of a "sin versus grace dichotomy" (p. 3ff). He observes concerning this false dichotomy:


In primeval history, the narrator focuses upon the origin and spread of sin, as well as God's consequent curse and judgment on humanity. Although God's blessing begins the narrative (1-2) and his grace surfaces from time to time after the fall, the main emphasis of primeval history is on sin and the curse. In patriarchal history, however, the spread of sin theme falls off the radar of most scholars. Here, it is generally argued, the narrator shifts the emphasis to God's promise of blessing in the lives of his chosen people, the family of Abraham. (p.3)

Gonzales goes on to assert that, "As a result of this tendency to contrast the primary theme(s) of primeval narrative with patriarchal narrative, the spread of sin motif fails to receive adequate treatment in Genesis 12-50" (p.4). He also gives a description of what he terms "the Plaster-Saint Syndrome":

I must admit that this has been a tendency that I have seen as well, not only in Bible scholars and commentators, but also on a popular level. In fact, I have found myself repeatedly reminding my own congregation that, as we read these narratives, we must never forget who the real hero of the story is. It is not Abraham, or Isaac, or Jacob, or Joseph. It is God! And we will not see this as clearly as we ought unless we are willing to see these men as clearly as we ought. And none of these men, by the way, would ever have wanted us to come away thinking he was the hero of the story anyway.

I am thankful for Gonzales' reminder of this important fact, and, as I have already noted, I am certain that his book will be on my short list of volumes for the study of Genesis. I have scanned through much of the book already, and now I am thoroughly reading through it very slowly, taking the time to soak in as much as I can (still only in part two!), but I have been very impressed. I recommend the book to all, even if it is just to balance out the rest of the works on your shelves, which is important in and of itself.

You may also want to check out these positive reviews.
Written by Keith Throop 1 comment: 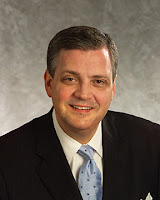 Earlier today Dr. R. Albert Mohler, Jr., president of The Southern Baptist Theological Seminary in Louisville, Kentucky, posted an excellent article entitled Render Unto Caesar? On Paying Taxes After Obamacare. In the article Dr. Mohler argues on the basis of such passages as Mark 12:7, Romans 13:1-7, and 1 Peter 2:13-14 that Christians are required to pay their taxes even if the government is corrupt and uses some of the tax money for evil purposes.

In my view, Dr. Mohler has correctly assessed the Biblical evidence and offered sound counsel for Christians who struggle with Obamacare, especially with its potential for allowing taxes to pay for abortions. Dr. Mohler tackles the issue head-on. Here are his final conclusions:


With the power to govern comes the power to tax, and government is a divinely-ordained institution. Christians are commanded to pay taxes, and were commanded by Christ and the apostles to pay taxes even to a pagan government involved in immoral and ungodly policies — including the oppression of the Jews and the nation of Israel. Thus, the question of paying taxes after Obamacare is put in its proper perspective.

We cannot and must not bend the knee to Caesar, accepting the government as our ultimate sovereign. We cannot submit to accept idolatry and idolatrous practices. But paying taxes is a matter of our Christian obligation.

There is no Christian mandate against tax avoidance — which is the use of lawful and legitimate measures to limit tax exposure. In other words, Christians are not mandated to seek to maximize their tax bills. But tax evasion is another matter, as is tax resistance. Those who seek by illegitimate and illegal means to resist or evade taxes run into direct confrontation with the commands of Christ and the teaching of the apostles.

Abortion is a moral catastrophe. The murder of the unborn is one of the greatest sins any society can tolerate, much less subsidize by taxation. The impact of the new “Obamacare” health care legislation is not yet fully clear, but the legislation lacks any adequate protection for the unborn. Immorality is added to immorality when the power of the government to tax and confiscate the funds of citizens is involved in such a catastrophe.

For this reason, Christian citizens should be involved at every level in the political process, seeking to use legitimate means to establish full protection for the unborn and for all other vulnerable persons. Elections have consequences, and this new legislation is a reminder of the power of government to do both good and evil.

But to refuse to pay taxes is to deny the legitimacy of the government itself, and to declare it beyond political remedy. Even to Christians suffering under the repressive, murderous, and dictatorial yoke of Rome, Jesus instructed the payment of taxes. Caesar, Christ knew, will one day face the judgment of Almighty God. Rome would one day be brought under his own feet and made subject to him.

For those who may be interested, I have dealt with a similar issue, namely whether it is right for Christians to rebel against their government, in a February 6 article entitled The American Revolution: Was it Biblical?
Written by Keith Throop No comments:

As you can see, Arthur W. Pink---Predestination is as much a Biblical and theological study of the crucial doctrine of predestination as it is a study of Pink's view of it. Pink's view of predestination is the focus of the book and the lens through which the Biblical doctrine is viewed and revealed to the reader, but at the same time the reader gets a solid overview of all the various aspects and issues of the doctrine. This book helps the reader to get a clearer understanding of a man who is often misunderstood, but whose legacy has helped to lift many pastors and churches out of the anti-theological, anti-Calvinist doldrums that have plagued them for so long.
You can order the book from Richbarry Press, c/o Dr. Richard P. Belcher, 105 River Wood Dr., Fort Mill, SC 29715. The cost of the book is $8.00 plus postage.
Written by Keith Throop 4 comments: