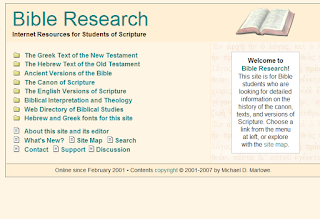 Perhaps some of the blog's readers have already visited Michael Marlowe's Bible Research website from the link on this page, but if you haven't already checked it out, I highly recommend it.

Marlowe has a wealth of articles and information at the site, covering areas such as study of the Greek New testament, the Hebrew Old Testament, ancient Bible versions, the canon of Scripture, the history and methodology of English Bible versions, and Biblical interpretation and theology.

Marlowe also has a helpful web directory of other sites useful for Bible study. And he has written a number of excellent articles himself, including some very good reviews of various English Bible translations. He is Reformed theologically and holds to the Westminster Confession of Faith. Give the site a look and let me know what you think.
Written by Keith Throop No comments:

Back to the Source: A Cool, Fun, Free Movie on Keys to Bible Interpretation

I have stumbled upon an interesting new Bible study software program called ScriptureDirect, which is dedicated to study of the New Testament. The makers of this software have also made a fun little movie called Back to the Source, which can be viewed or downloaded for free. The movie takes you on a journey with Phil, a detective who is trying to figure out the meaning of a small piece of text that was left to a woman by a deceased relative. Although she doesn't understand what the text is or where it came from, she really wants to know what it means because it refers to a mysterious treasure. As it turns out, the text comes from the New Testament and, as Phil tries to find out the meaning, he discovers four keys to interpretation of the New Testament.

If you want to have some fun, check it out. There is no ScriptureDirect advertisement until the very end of the movie. I must say, though, that this looks like both a very useful and an ultra-cool piece of software. Rubén Gómez has given some background about it at his Bible Software Review website:

First of all I should mention a new and innovative program called ScriptureDirect. Bennie Wolvaardt, the developer, worked alongside Johannes Louw himself, who dedicated years of his life to this project after his retirement as professor. The interlinear translation has been prepared specifically for this program, and both the links between the Greek and English and the selection of the most likely meaning from Louw-Nida for each word of the NT have been done one by one. Similarly, it has been proofread word by word. The program does not include a library of books integrated by a search engine. Rather, it is very specific tool for diving into the original meaning of the Greek New Testament. This can be done starting from the English text (typing practice will yield five different semantic domains — i.e., 41.28, 42.3, 42.10, 68.20 and 90.45), the list of semantic domains itself [e.g., 10. Kinship Terms D. Kinship Relations Based Upon Marriage (10.53-10.61)] or the Greek text itself (φυλακή). It is very useful when you follow the designed workflow, but it does not offer yet the ability to make complex command line or dialog searches.

Are there any blog readers who can tell us more about this software? I would like to hear your comments.
Written by Keith Throop 1 comment: 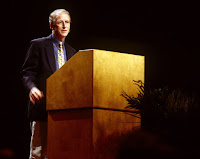 Back in June, John Piper wrote an interesting article at the Desiring God Blog. The article was called 20 Reasons I Don't Take Potshots at Fundamentalists. I was intrigued by the title and got to thinking that, in too many Evangelical circles, those "fundamentalists" have become the whipping boys from which most appear to want to distance themselves. In fact, in the wider culture and in the media, the term "fundamentalist" has even been taken so negatively as to be applied to the most extreme and even cruel elements of any religious group. How many of us, after all, have not heard the media refer to those wacky terrorists who want to blow people up as "Islamic Fundamentalists."

But there was a time when the term referred to those who were the most faithful to Scripture and who refused to allow their Christian faith to be watered down or to succumb to the twin threats of modernity and relativism -- and now post-modernity. Anyway, Piper's article reminded me that, although there have been some extreme types who have given the rest a bad name, there are still many good openly professing fundamentalists out there. Here are the twenty reasons that Piper has given for his unwillingness to "take postshots" at fundamentalists.

1. They are humble and respectful and courteous and even funny (the ones I've met).
2. They believe in truth.
3. They believe that truth really matters.
4. They believe that the Bible is true, all of it.
5. They know that the Bible calls for some kind of separation from the world.
6. They have backbone and are not prone to compromise principle.
7. They put obedience to Jesus above the approval of man (even though they fall short, like others).
8. They believe in hell and are loving enough to warn people about it.
9. They believe in heaven and sing about how good it will be to go there.
10. Their "social action" is helping the person next door (like Jesus), which doesn't usually get written up in the newspaper.
11. They tend to raise law-abiding, chaste children, in spite of the fact that Barna says evangelical kids in general don't have any better track record than non-Christians.
12. They resist trendiness.
13. They don’t think too much is gained by sounding hip.
14. They may not be hip, but they don’t go so far as to drive buggies or insist on typewriters.
15. They still sing hymns.
16. They are not breathless about being accepted in the scholarly guild.
17. They give some contemporary plausibility to New Testament claim that the church is the “pillar and bulwark of the truth.”
18. They are good for the rest of evangelicals because of all this.
19. My dad was one.
20. Everybody to my left thinks I am one. And there are a lot of people to my left.

One of those things that kind of makes you go, "Hmmmm...."
Written by Keith Throop No comments:

Email ThisBlogThis!Share to TwitterShare to FacebookShare to Pinterest
Labels: Items of Interest

Asking the Right Question About the Problem of Evil

I first saw this video at the Contemporary Calvinist blog, and I liked it so much that I wanted to share it with my readers as well. In it Voddie Baucham discusses the need to ask the right question about the problem of evil. He had me almost shouting, "Amen!"
Written by Keith Throop 1 comment: