Interview on the House-Church Movement 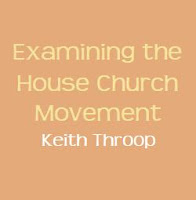 Last night I had the pleasure of being interviewed by Roderick Edwards for one of his Kingdom Commentaries. The primary focus of the interview was about the way in which many in the House-Church Movement are making requirements of certain practices that the Scriptures do not require. We discussed two of these requirements, meeting in homes and partaking of the Lord's Supper as a part of a larger meal, but for some reason failed to get to a third requirement, which is having completely open, spontaneous meetings with no one leading. We just didn't have time to get to every issue in a half hour, but I have addressed all three of these issues thus far in the series of articles I have been posting here.

Here is some of the evidence that at least one of the leading voices of the House-Church Movement is making requirements of these things:

1) With respect to meeting exclusively in homes, Steve Atkerson says in his article entitled Interactive Meetings, "In short, we believe that the patterns for church life evident in the New Testament are not merely descriptive, but are actually prescriptive (2Th 2:15 , 1Co 11:2). Thus, we believe in home-based and sized fellowships...."

2) With respect to having completely open meetings that are interactive and spontaneous, with no one leading, Steve Atkerson says in the same article, "Holding church meetings in this spontaneous, interactive manner is in fact declared to be imperative according to 1 Corinthians 14:37, 'If anybody thinks he is a prophet or spiritually gifted, let him acknowledge that what I am writing to you is the Lord’s command.' Thus, 1 Corinthians 14 is not merely descriptive of primitive church meetings. Rather, it is prescriptive of the way our Lord expects meetings of the whole church to be conducted."

3) With regard to eating the Lord's Supper as a part of a larger meal, in an article entitled The Lord's Supper - Feast or Famine?, Atkerson argues in the same way he has about the Apostolic tradition and meeting in homes: "Why would anyone want to depart from the way Christ and His apostles practiced the Lord’s Supper? The apostles clearly were pleased when churches held to their traditions (1Co 11:2) and even commanded that they do so (2Th 2:15 ). We have no authorization to deviate from it."
Written by Keith Throop