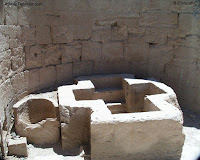 Wayne Grudem has rewritten a section of his Systematic Theology text entitled "Do Churches Need to Be Divided Over Baptism?" in the chapter on baptism. He changed his stance on whether or not baptism should be required for church membership by Baptist churches. He no longer advocates that membership without believer's baptism should be allowed. This was reported yesterday at Justin Taylor's Between Two Worlds blog.

Earlier today John Piper posted a blog article entitled Response to Grudem on Baptism and Church Membership taking exception with Wayne Grudem over the change. This should not be surprising given Piper's own stance on the subject in recent years. It is well known that he has advocated removing the requirement of believer's baptism for membership at his own church.

Anyway, later today at the Desiring God blog Wayne Grudem's Response to Piper was also posted. I hope this will result in a continued dialog between the two of them online. They have been good friends for many years and are both able representatives of their respective views. Their exchange is and can continue to be a model for loving Christian conversation about an important matter. In the process they could provide a valuable help for the rest of us in thinking through this important issue.

I know at Immanuel Baptist, where I currently serve as an elder, we have taken the same position as Grudem. So far I have found no reason to change my stance on the matter, but I certainly welcome the informed discussion and hope that it will continue for a bit.

Thanks Wayne and John!