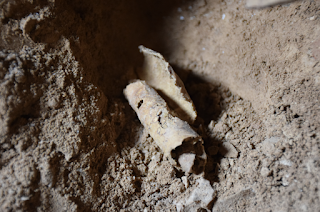 Some of our readers may already have seen the reports of a discovery of another Dead Sea Scrolls cave by archaeologist Randall Price, which brings the number to twelve. The cave includes finds of Neolithic remains, including arrowheads and knives, broken jars which would have contained papyri, and small fragments of parchment and papyrus (see photo by Randall Price at left), as well as at least one linen used for wrapping scrolls. The Logos Academic Blog has a nice article on the find here.The article also holds out hope for the discovery of a thirteenth cave in the near future:


It is hard to believe it, but Price and his team seem to have discovered a twelfth cave, something Scrolls scholars have been dreaming about for sixty years. And not only that, Price thinks there may even be a thirteenth cave near the Qumran ruins.

Unlike the newly discovered Cave 12, the mouth of the suspected thirteenth cave is concealed — which means there is a chance that it has not been looted. If that is the case, more texts could be discovered. If that happens, who knows what new things we might learn?

Such a discovery would be very exciting indeed!
Written by Keith Throop